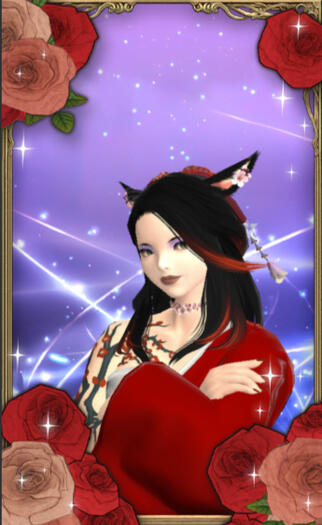 "Why not come dance with me, honey? I'm sure you'll get your kicks."

Underneath the Glow of Azeyma 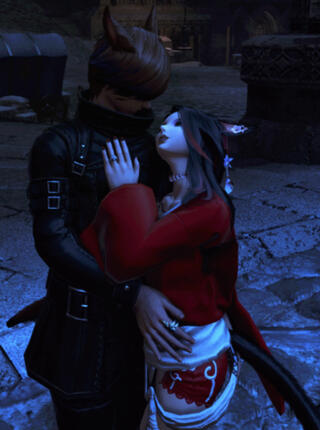 Born in the Y Tribe as a humble hunter, Y'karia hungered for more in her life than remaining in Forgotten Springs. Ostracized by the females due to her alluring beauty, and sought after by the males for breeding, she loathed staying any longer with her kin. Being rebellious and outspoken, she was quickly made the outcast, yet one person still remained a friend despite the clan's protestations.

She knew that her charm would prove to be an effective weapon, and thus would hone it through dancing. Eventually, the tribe would see fit to kick her out as a young teenager, as she sought out a life beyond being another tribe wife, not wanting to just conform for the sake of conformity. She would rather learn the ways of the world outside rather than be told what is and what isn't.

Ul'dah was not her first choice, but it would serve to be a suitable training ground for her - not only to hone her charm and seductive mannerisms, but to perhaps get her feet wet in the art of dance. It started out as merely observing the current street performers, before learning to emulate and even create her own style. This would earn her some portion of gil, her skill growing with passing time. Eventually, she would grow restless with this, as while she performed, she would listen to the troubles and hardships of the people, wanting to help them but with no combat experience, she knew she would wind up killed. However, one performer's words stuck with her -- her dancing was her way of helping. She was lifting their spirits, making them forget their troubles for a little while, and thus, was she invigorated to dance more.

Some years later, she would seek passage to the Gold Saucer, looking for work as a dancer there. However, her ears picked up rumors of a Troupe performing in Limsa Lominsa, and Y'karia took off with haste. Troupe Falsiam was indeed hosting a performance, and it would be this one in particular that would shoot Y'karia up further in her goal.

Howdy! I'm glad you took the time to read my carrd! I put a lot of effort into it so I hope you like it!

Essentially, if you're interested in roleplaying with my character, just hit me up! I would love to roleplay with you! Here's some stuff you oughta know:

.. Romance is more than acceptable! I'm a cheesy romantic, so feel free to try and play anything from white knights to roguish characters. Swoon me, I will eat it up. I am open to multiple storylines so there is no limitations to what our characters can do together. This means that I can have my character be in different relationships and it not break someone's story. If you are not a fan of this, then I am sorry. I do not like locking my character to one person in every situation ever.

I am a female that prefers males, so I apologize to any ladies.

This also means you need to be an ADULT to do this kind of storyline with me. I do mature themes and I push lines. If you are below the age of consent, then don't expect this storyline. Ever.

.. I am not someone who expects a novella every response. I am pretty relaxed and can work with one-liners SO LONG AS they are decent enough to where I can work off of them. Beyond this, I am not picky.

.~. I am willing to meet and travel to make interesting scenarios, so don't feel as though you're forever locked to Ul'dah because of my character. Yes, she is a dancer. No, she isn't ball and chained to one specific alone. I am happy to accommodate.

.. Discord: Y'karia Rhiki #0945 - Easiest and Fastest way to get a hold of me. My statuses can inform you of what I'm doing (or not doing) at any given time.

Y'karia Rhiki @Goblin (Main) - Goblin is my home, which you can find me either running around or at one of my many jobs dancing the nights away.

.~. Tumblr: https://thenobleandsalacious.tumblr.com/
Brand new, but willing to RP here if need be. Not reliable as of yet.